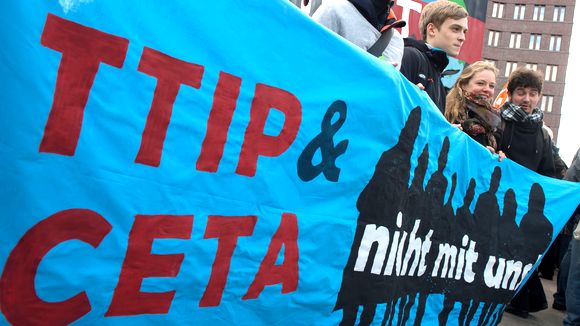 The free trade treaties with Canada (CETA) and the United States (TTIP) are not threatening European standards, the negotiators in Brussels assure us. Yet environmental and food safety regulations have already been weakened.

‘Whole neighbourhoods were covered in a layer of ash. The houses, the streets, cars, everything was covered with ashes,’ Martin Manxto from the Spanish city of Bilbao tells us. Pollution is nothing new for the inhabitants of the adjacent village Muskiz. For thirty years the Petronor refinery, owned by multinational Repsol, has caused ash flakes to regularly descend from its chimneys on the houses of the inhabitants of this densely populated area.

What is new however, is the load of raw tar sands oil which at the time was being processed there. The refinery is visibly struggling to process this heavy form of crude. The first freighter, filled with 600.000 barrels of Canadian tar sand oil, entered the harbour of Bilbao early June 2014.

In 2012 Europe imported no more than 4.000 barrels tar sands a day. But it is expected this will increase significantly: in raw form from Canada, or processed into diesel or gasoline from the US. The Canadian organisation Natural Resources Defence Council predicts that in 2020 imports will rise to a whopping 725.000 barrels a day. Trade agreements like CETA and TTIP play an important role in this rise.

When thinking of trade treaties, neighbourhoods covered in ash are not the first thing that comes to mind. Why would trade-treaties influence our climate policies?

Yet they are, as becomes apparent from developments regarding the trade treaties between Europe and Canada (the already finalized Comprehensive Economic and Trade Agreement, CETA) and the United States (the Transatlantic Trade and Investment Partnership, better known as TTIP). The reason: trade negotiations used to be about reducing trade barriers, such as quota and import taxes, but nowadays they mostly cover the alignment of regulations.

Trade commissioner Cecilia Malmström insists that the alignment of European and American regulations ‘will not be at the expense of the environment, health, safety or consumer protection.’ Yet European climate and food safety regulations have already been watered down as a result of trade negotiations. The tar sands oil which is trickling into Europe is one example.

Most tar sands – a mix of sand, clay and oil – are located in the Canadian province Alberta. The climate impact of tar sands oil is high, as CO2 emissions caused by this oil are much higher than those of conventional oil.

Not only the climate, also the population suffers because of the tar sands industry, says Allan Adam, chief of the Athabasca Chipewyan First Nation. It causes large scale water pollution: ‘Our children get skin rashes when they swim in the lake. As a child I could drink from our rivers, nowadays that is impossible.’ The population struggles with health problems and increased cancer rates. ‘The industry keeps claiming they cannot be appointed as the sole cause, but our research shows otherwise.’

Canada is the largest exporter of tar sands worldwide. Over the last years the country has invested heavily in the expansion of its production capacity and is looking for new export markets. The European market, dependent as it is on the import of oil and its derivatives, is calling.

Before Canadian tar sands reach Europe, they are processed in American refineries, based mostly on the gulf of Mexico. Here too the stakes are high. In 2012 trade with Europe in gasoline and diesel was worth 32 billion dollars.

«The Canadians have been very persuasive» 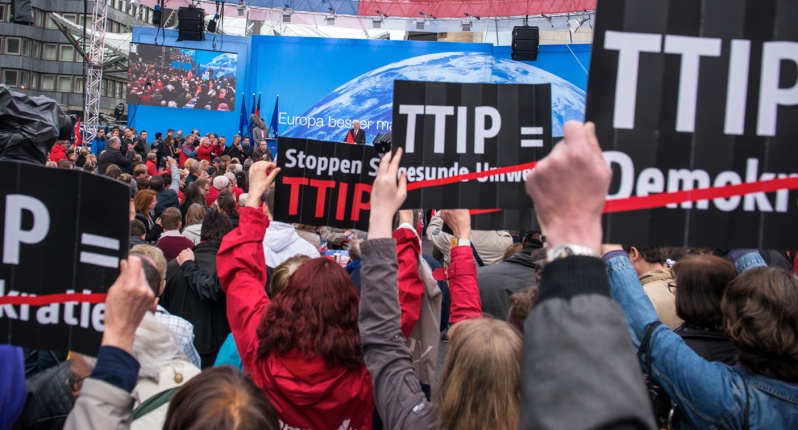 Europe however threatened to throw a spanner in the works. In 2009 it accepted the so-called Fuel Quality Directive (FQD), a guideline obliging fuel suppliers to reduce CO2 emissions in the transport sector with 6 percent. The core of the new FQD measures was the distinction between various kinds of fuel based on their CO2 emissions.

In a study done for the European Commission, professor Adam Brandt of Stanford University concluded that the emissions of tar sands oil are 23 percent higher than those of conventional oil. Following this research, the Commission attributed a higher emission value to tar sands oil. The message was clear: to achieve the 6 percent CO2 reduction the use of tar sands had to be discouraged.

Canada, the US and oil multinationals such as BP and Shell saw the European measures as a threat. The CETA and TTIP negotiations turned out to be a good opportunity to express their worries.

The Fuel Quality Directive was a widely discussed subject during the negotiations with Canada, as becomes clear from confidential files which the Commission had to release. The Canadian minister-president Stephen Harper, ambassador Ross Hornby, a minister from the oil province Alberta: they all visited the European Commission to have their say.

The Canadians fiercely opposed the dirty label for tar sands oil. The emissions of this oil are roughly the same as those of conventional oil, they stated. Oil companies such as Chevron and Exxon started a large scale lobby against the ‘arbitrary distinction’ between conventional and tar sands oil.

Soon the US also entered the discussion. David Friedman, vice-president of theAmerican Fuel and Petrol Manufacturers – an organisation representing companies like Chevron and Shell – explicitly called out to American negotiators to use the trade talks to discuss the Fuel Quality Directive.

Michael Froman, chief US negotiator in the TTIP talks, shared the concern that the Fuel Quality Directive would be ‘a barrier for American-European trade.’ Froman: ‘I have raised these issues with senior Commission officials on several occasions, including in the context of the TTIP.’ He promised he would ‘continue to press the [European] Commission to take the views of stakeholders, including US refiners, under consideration.’

Karel de Gucht, European trade commissioner at the time, firmly denied any link between TTIP and the implementation of the Fuel Quality Directive.

The European Commission eventually gave in to the pressure. This is shown by a leaked European Council document from July 2014, drafted in preparation for the last CETA summit. The document states that cooperation with Canada in the area of energy is ‘underperforming, due in part to Canada’s opposition to the pending implementing measure under the EU’s Fuel Quality Directive.’ It goes on saying that the new proposal was realised ‘following very close consultations with the Canadian side and other stakeholders, and should address Canada’s key concerns’. Apparently it did: during the September 2014 summit in Ottawa the finalization of the CETA negotiations was celebrated.

In the new proposal for the Fuel Quality Directive from 2014, the distinction between conventional and tar sands oil has been dropped.

Many blame the intensive Canadian lobby for the disappearance of the dirty label for tar sands. Catherine Bearder, member of the European Parliament (MEP) for the liberal-democrats: ‘The pressure from Canada was enormous. [We have] capitulated and thrown science out of the window.’

When asked why the Fuel Quality Directive was watered down, the Commission answered that ‘the Canadians have been very persuasive.’

The influence of the trade treaties with Canada and the US on the climate directive is no exception. Well before its completion TTIP has already influenced the workings of the meat processing industry, where it was recently permitted to cleanse meat using lactic acid. The European wish to label meat and other products derived from the offspring of cloned animals has also been swept of the table.

On the 23th of February 2015 the European Commission presented a long-awaited bill about cloning. They had previously been sent back to the drawing board by Parliament because the original proposal did not meet its demands. The Parliament insisted that products from offspring of cloned animals would also be labelled. Yet, the Commission did not give in: the new proposal did not take the offspring of cloned animals into account.

An earlier and ‘more ambitious proposal’,which did include this, was supposedly blocked in order ‘not to threaten the TTIP treaty’, says Peter Liese, MEP for the christian-democrats.

The American government does not require companies to keep track of which animals are cloned. The meat processing industry therefore fears higher costs if they submit to the European standards.

The hidden costs of trade treaties

Increasing American pressure eventually ensured that some Commissioners no longer supported the bill. ‘Their lobbying strategy was aimed at the highest level within the European Commission’, a source, who was closely involved with the development of the bill and for this reason wishes to stay anonymous, tells us. This strategy was not without success. ‘Two days before we wanted to go over the report with the other commissioners we heard that even agriculture commissioner Dacian Ciolos would no longer support it. He was convinced by the Americans. At that moment we knew that the bill would not make it.’

The European prohibition to treat beef with lactic acid was repealed as well. This happened in 2012, even before the first TTIP negotiations took place. Lactic acid is used to chemically disinfect carcasses and kill salmonella and other bacteria. This method is conventional in America, but controversial in Europe. Opponents call the method of chemically cleansing meat a way to cover up for lack of hygiene in slaughter houses.

Yet the Parliament voted in favour of lifting the ban. The vote was preceded by a visit from Jean-Luc Demarty, the second man of DG Trade. He came with a warning for the Parliamentary committee responsible for food safety. As a consequence of maintaining the ban ‘the perspective of opening a comprehensive trade negotiation with the US would disappear.’

The warning did not miss its goal. Where previously a minority in Parliament was in favour of lifting the ban, this changed into a slight majority after the speech. ‘I had never before experienced that someone from the trade commission decided to address us directly’, says MEP Bart Staes (Green Party) who was present at this event. ‘Losing the vote was definitely linked to his speech.’

MEP for the liberal-democrats Marietje Schaake, who strongly supports the trade treaty, confirms this. Despite dismissing the fear of TTIP lowering European standards, she wrote on her blog that lifting the ban on lactic acid served to ‘gain trust of the Americans.’

In reaction to the issues raised in this article a spokesperson for the European Commission denied that European standards were lowered for trade agreements. ‘There is no direct link between the Fuel Quality Directive and CETA/TTIP’, she states. In the clone debate no more than an ‘inter-institutional discussion’ took place, from which it became clear that ‘more time’ was needed to research ‘the very complex option of labelling on impact and feasiblity’, which to this day has not been concluded. In regards to permitting lactic acid the spokesperson says that ‘basic legislation relating to the use of lactic acid will not be part of the (TTIP) negotiations. Which is off course true, since the ban was already lifted before the actual negotiations started.

The weakening of cloning regulations, the lifting of the ban on lactic acid and the removal of the dirty label for tar sands oil, show the far reaching influence of trade treaties. And there are more examples. Recently Corporate Europe Observatory reported how TTIP delayed the development of a European ban on a large amount of hormone-disrupting chemicals.

The prolonged negotiations show that trade treaties nowadays entail much more than trade alone. In the context of CETA and TTIP far reaching reforms are pursued to strengthen Europe’s connection to the US and Canada. The negotiations take place behind closed doors, as a result of which very little information sees the light. But the message is clear: the costs of these trade treaties, for both people and the environment, are high. 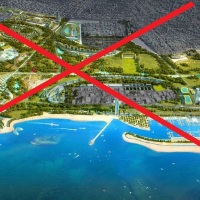 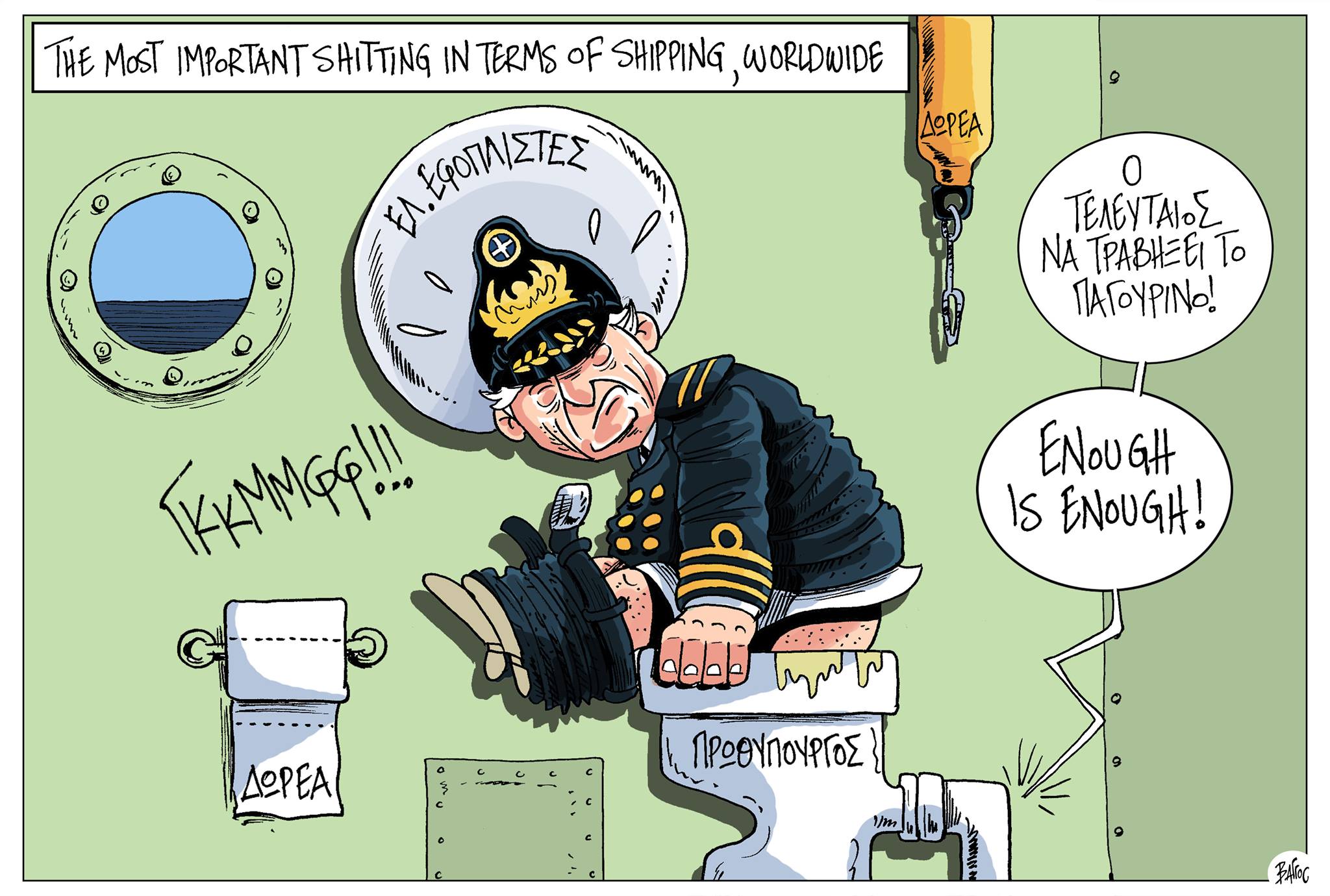 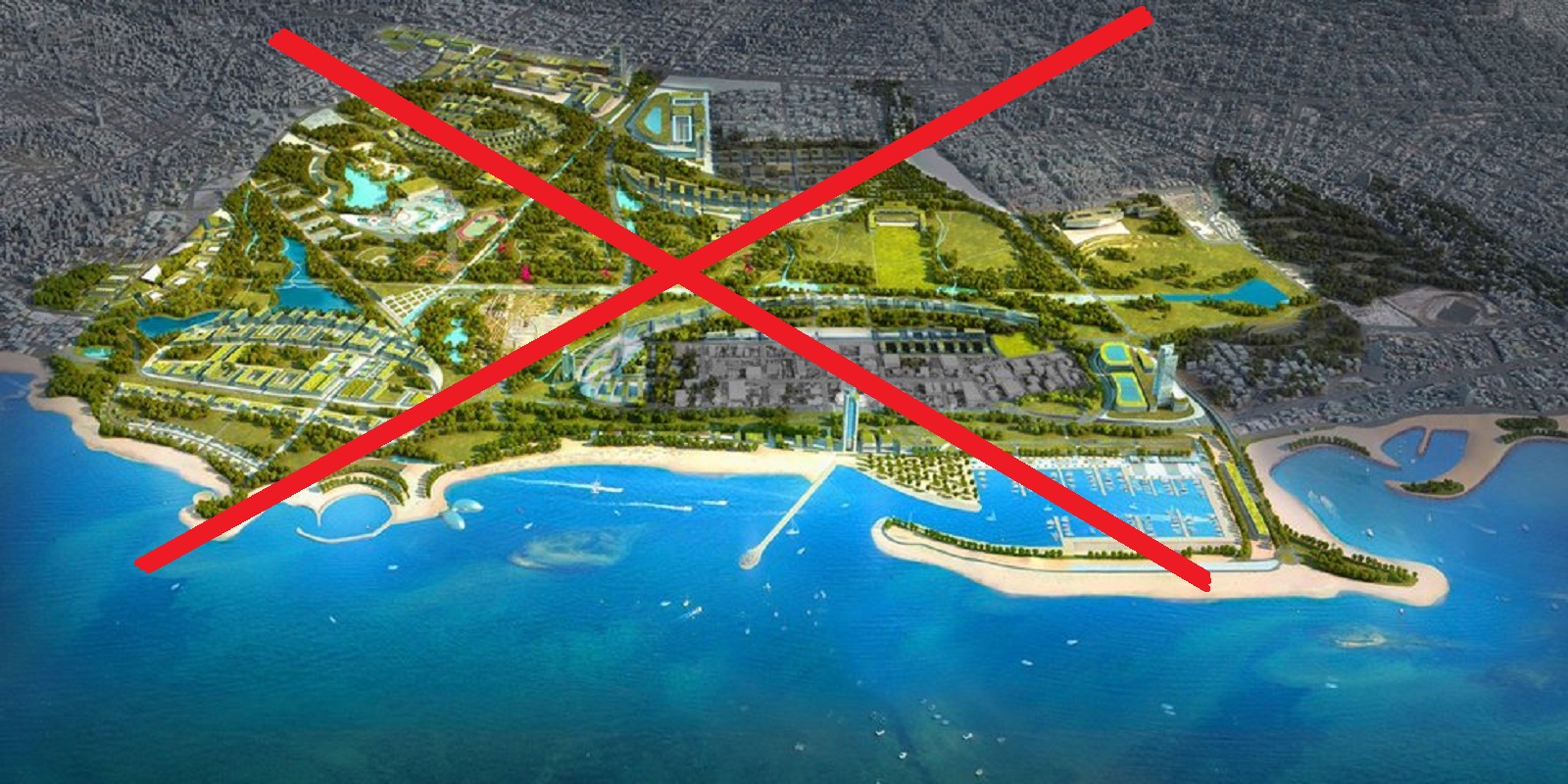 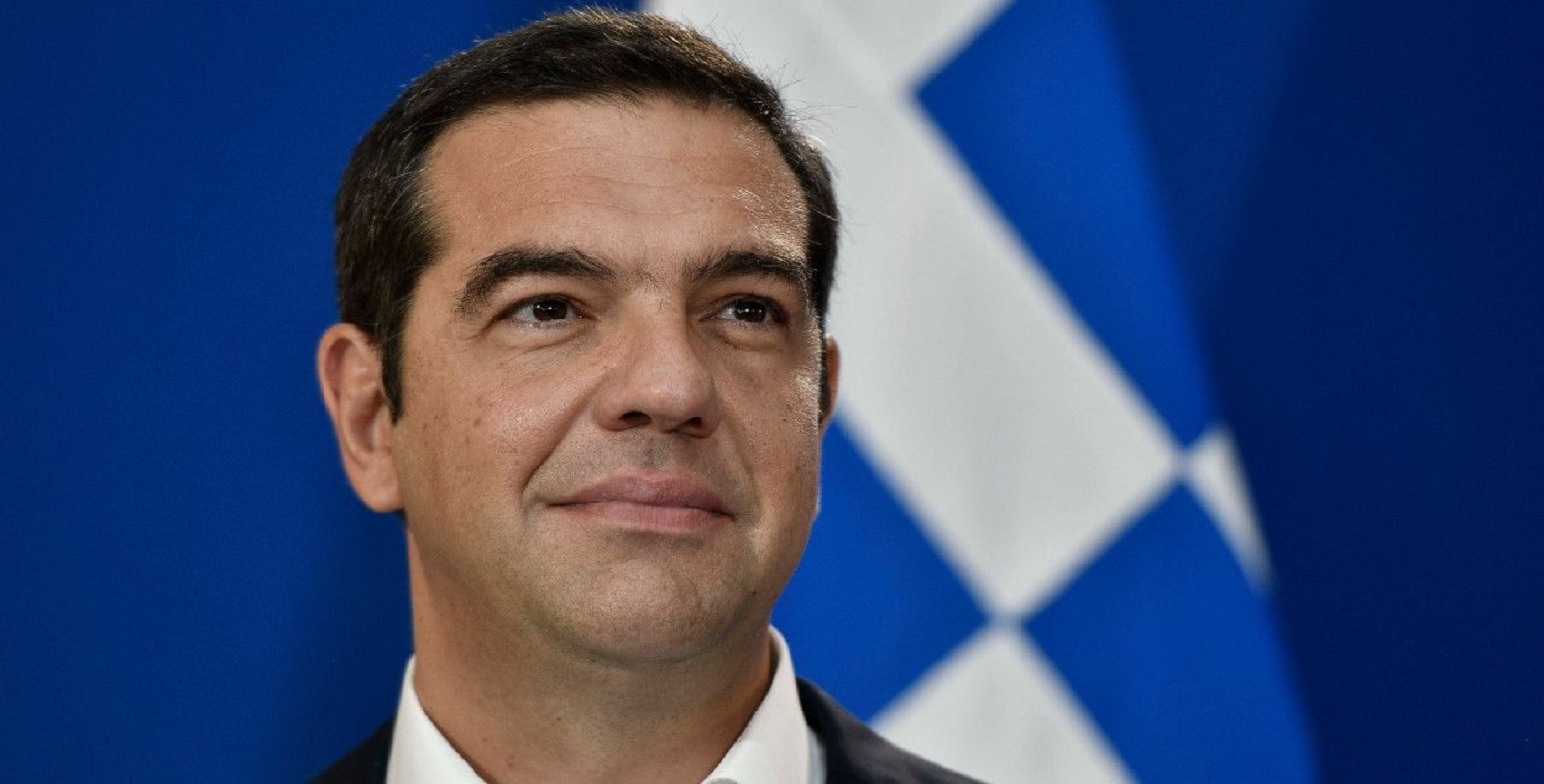